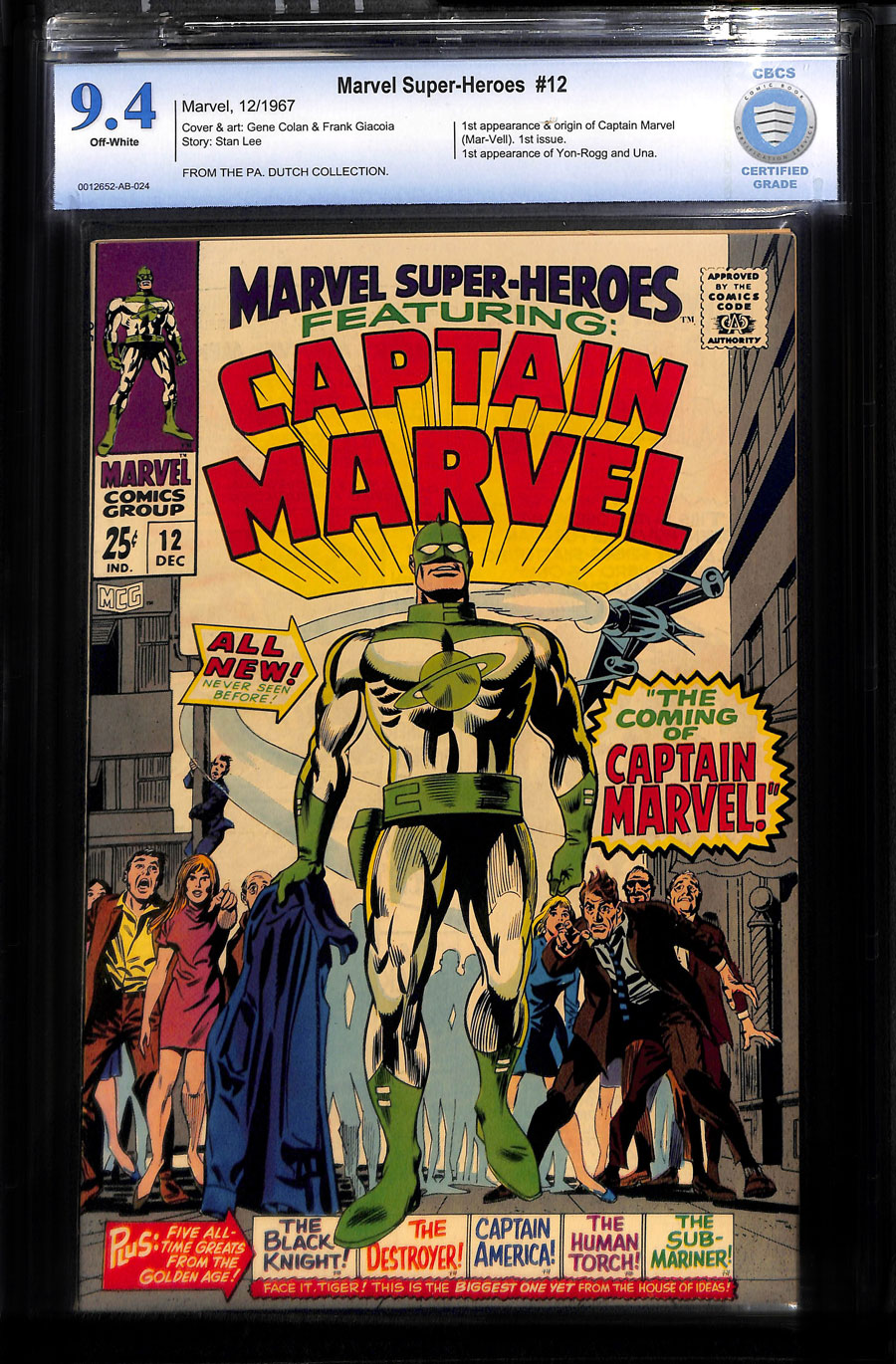 --
Accepting Offers
--
Offers
FYI there's no need to include decimal points(.).
Offer Confirmation
You are about to submit an offer of . If accepted, you are legally obligated to purchase the book. Are you sure you want to continue?
FYI there's no need to include decimal points(.).
Buy Confirmation
You are about to buy this item for , and will be legally obligated under the terms of our User Agreement to pay for it in a timely fashion. Continue?
PUBLISHER: Marvel
COMMENTS: off white pgs
Gene Colan cvr/art; origin & 1st app. of Captain Marvel (Mar-Vell), 1st app. of Yon-Rogg and Una
Pennsylvania Dutch Copy
Read Description ▼
Sell One Of These Inquire About This

Watch
off white pgs
Gene Colan cvr/art; origin & 1st app. of Captain Marvel (Mar-Vell), 1st app. of Yon-Rogg and Una
Pennsylvania Dutch CopyMarvel Super-Heroes #12 introduces us the first Captain Marvel of Marvel comics after Fawcett comics ceased the publication of their popular hero by the same name due to a lawsuit by DC. To Marvel it was essential to own the trademark on the name because of the connection to their own company, thus began a long battle outside of the books to keep the name in-house. In this premiere we meet Dr Walter Lawson aka Mar-Vell, a Kree science officer who travels to Earth to spy on humans for his home planet, after growing affectionate for earthlings aids them in several occasions against the Kree. Seeing his actions as treasonous, Mar-Vell was exiled from his home where he would go on to be a solo hero taking part in numerous cosmic adventures while also teaming up with other heroes against the Kree Empire and the Mad Titan, Thanos. Ironically the character didn't really catch on with readers until a graphic novel was released that told the story of his death. The publication featured heroes and villains from all over the Marvel Universe paying their respects, with even Thanos stating that Mar-Vell was his greatest adversary. Over the years the mantle of Captain Marvel was passed on to many characters as Marvel fiercely tried to keep the trademarked name under their control. Currently and possibly the most notable character to bear the title is Carol Danvers, formerly Ms. Marvel, who made her cinematic debut in 2019's “Captain Marvel.” Though the original Captain Marvel initially failed to grasp readers, the character eventually developed a cult following and became a hero whose legacy would have lasting ramifications in comics and movies to this day. With the current cinematic universe ramping up to feature more stories based on the Mar-Vell legacy, comic book investors and collectors expect the value of this book to increase dramatically in the next few years.
Artists Information