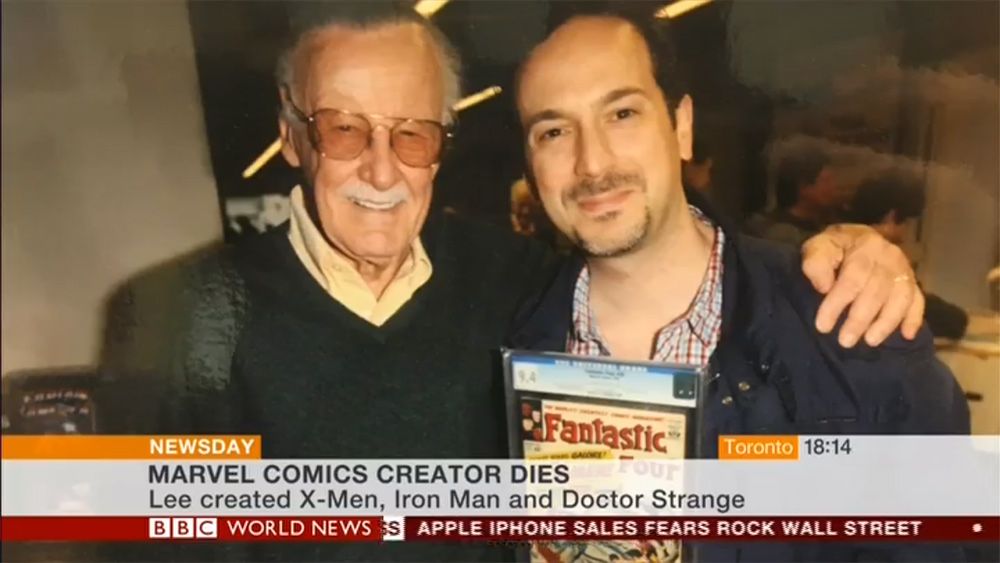 Stan Lee, the iconic comic book creator, passed away this week at the age of 95, and Vincent Zurzolo appeared on BBC World News to pay tribute to the giant of the comic book industry. Zurzolo displayed several of the comics that made Lee a household name while he told the story of his first encounter with Lee. “I was standing around alone at San Diego ComicCon when someone approached me and said “Hello, I’m Stan Lee”, I was a little nobody, and he was a legend coming over to talk to me,” Zurzolo recalled. “Over the years I got know him and interview him, and he was a real kind guy, just a sweetheart.”

Zurzolo discussed Lee’s most popular creation, the Amazing Spider-Man and described why the character was so revolutionary and inspirational. “Spider-Man’s alter ego Peter Parker was a nerdy kid, who was unlucky with the ladies, he never had any money and was very relatable and human,” Zurzolo continued. “He had all the headaches of anybody walking down the street.”

Zurzolo went on to display copies of Amazing Fantasy #15, Avengers #1, Fantastic Four #1 and Incredible Hulk #1, all of which will be up for grabs in Metropolis’s sister company’s auction.

The New York Daily News also interviewed Zurzolo in their moving testimonial to Lee. You may read the interview by clicking http://www.nydailynews.com/entertainment/ny-ent-marvel-stan-lee-dead-20181112-story.html

Bartiromo, who was visibly impressed by the high prices paid for the four-color treasures, went on to question Zurzolo about the nostalgic motivations behind the comic market, the investment opportunities surrounding the hobby, and even her husband’s interest in adult-themed comics.

Zurzolo went on to discuss the success of the modern-day comic book phenomenon, The Walking Dead, and previewed ComicConnect’s upcoming Walking Dead Auction, which would consist of highest-graded copies and original art, which is due to coincide with 2017’s New York ComicCon.