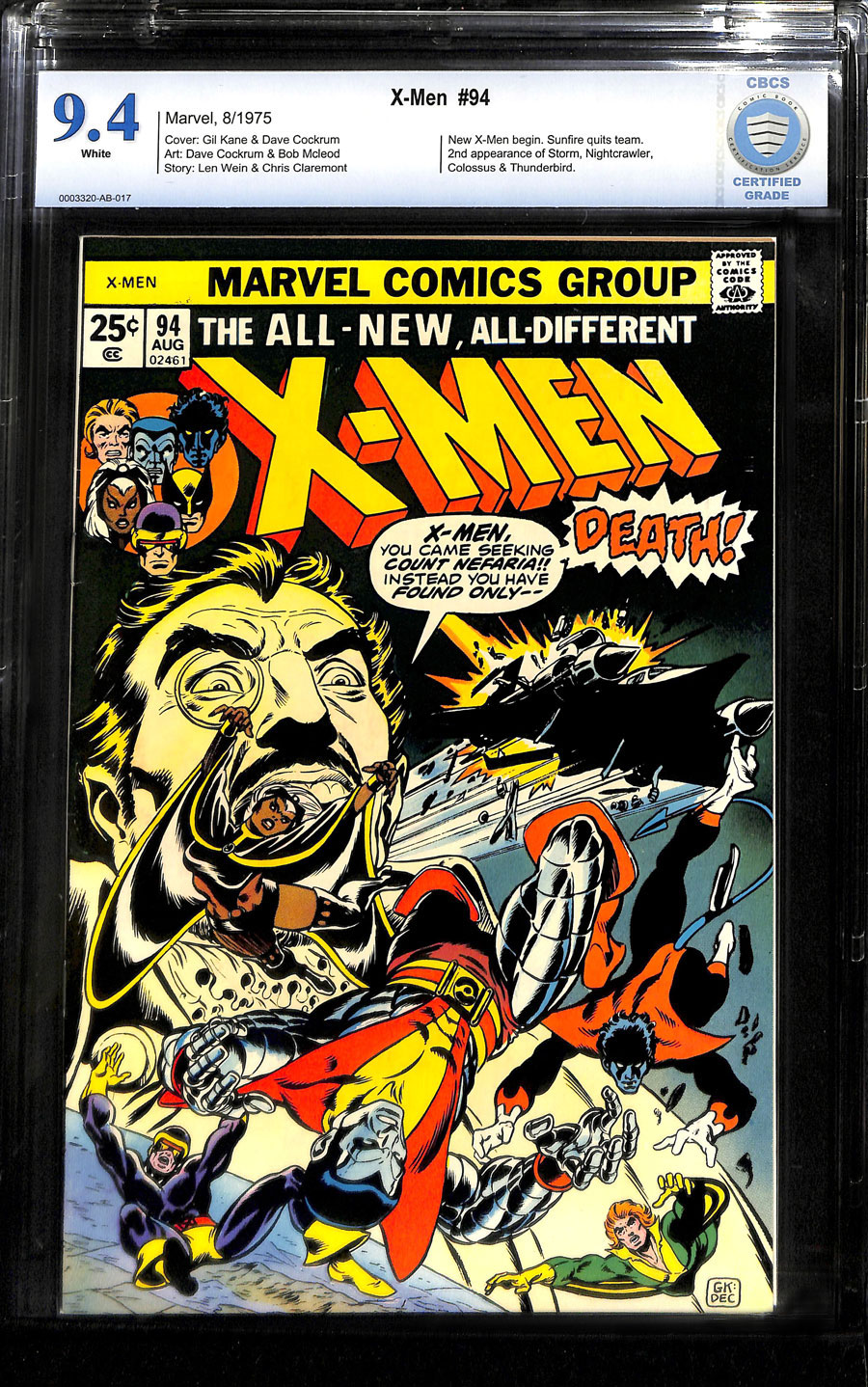 --
Accepting Offers
--
Offers
FYI there's no need to include decimal points(.).
Offer Confirmation
You are about to submit an offer of . If accepted, you are legally obligated to purchase the book. Are you sure you want to continue?
FYI there's no need to include decimal points(.).
Buy Confirmation
You are about to buy this item for , and will be legally obligated under the terms of our User Agreement to pay for it in a timely fashion. Continue?
PUBLISHER: Marvel
COMMENTS: white pgs
Kane/Cockrum cover; new X-Men begin (Sunfire quits) (8/75) Comic Book Impact rating of 9 (CBI)
Read Description ▼
Sell One Of These Inquire About This

Watch
white pgs
Kane/Cockrum cover; new X-Men begin (Sunfire quits) (8/75) Comic Book Impact rating of 9 (CBI)It is not everyday a comic book comes out that changes the face of the entire industry, but X-Men #94 was an issue that had wide-reaching impact, that echoes throughout popular culture in the modern day. The storyline, involving old X-Men nemesis Count Nefaria, is rather standard fare, but it is not the actual plot of this issue that makes it a top Bronze Age key, rather, it is the appearance of the new X-Men team, Storm, Banshee, Wolverine, Thunderbird, Colossus, Nightcrawler, and Sunfire, that put this issue in the ranks of legendary comics. Although the new characters were introduced in Giant-Size X-Men #1, this is the first issue in the run to feature X-Men mk. II. The series was languishing in reprint purgatory and close to cancellation before this issue revived the franchise. A renewed breath of life turned out to be perfect for Marvel fans who were longing for a jolt of fresh energy, and this new group of X-Men took off like a house on fire. These characters are now the ones most closely associated with the franchise, and the addition of John Byrne into the mix later in the decade would only serve to send this title into the stratosphere; along the way Wolverine would grow into one of Marvel's top sellers, giving rise to an enormously successful movie franchise, and myriad other X-Men spin-off comics. It all started here. Any X-Men fan worth their salt needs to own this landmark book.
Artists Information

Bob McLeod is an American comic book artist best known for co-creating the New Mutants with writer Chris Claremont. McLeod drew the graphic novel and the first three issues of the New Mutants and inked a number of subsequent issues. He penciled some issues of Star Wars and Spider-Man as well. In 1987, he inked Mike Zeck’s pencils on the Kraven’s Last Hunt storyline in the Spider-Man titles.