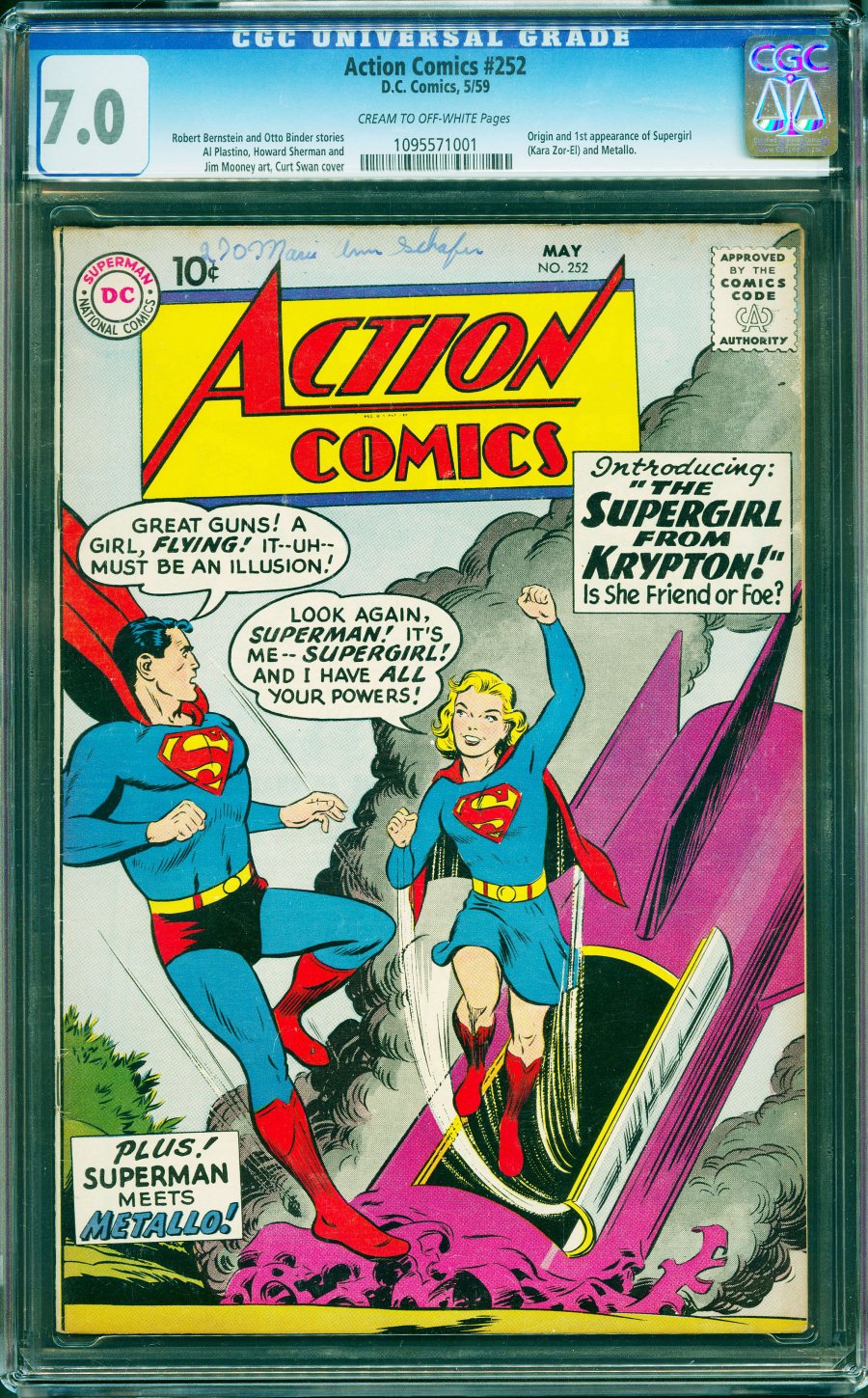 --
Accepting Offers
--
Offers
FYI there's no need to include decimal points(.).
Offer Confirmation
You are about to submit an offer of . If accepted, you are legally obligated to purchase the book. Are you sure you want to continue?
FYI there's no need to include decimal points(.).
Buy Confirmation
You are about to buy this item for , and will be legally obligated under the terms of our User Agreement to pay for it in a timely fashion. Continue?
PUBLISHER: DC
COMMENTS: A 15% BUYER'S PREMIUM WILL BE ADDED TO THIS ITEM AT CONCLUSION OF THE AUCTION
crm/ow pgs
Swan cvr; origin & 1st app. Supergirl; 1st app. Metallo
Read Description ▼
Sell One Of These Inquire About This

Watch
A 15% BUYER'S PREMIUM WILL BE ADDED TO THIS ITEM AT CONCLUSION OF THE AUCTION
crm/ow pgs
Swan cvr; origin & 1st app. Supergirl; 1st app. MetalloThe notion of a female answer to Superman had been tried out a few times before this debut appearance, with various one-offs and stunts or imaginary stories allowing DC's staff writers to try out new angles on the strip, which was seemingly running out of steam and ideas. The original Superman TV series was still on the air, however, and merchandising for the character was as much a cash cow as ever, so the exhausted creative staff were willing to try anything to keep the flagship DC title chugging along. As Superman had never really had a sidekick like Batman's Robin or Captain America's Bucky, it was decided to try adding a little female flavor to the mix, and, based on the strong reader response to a recent Super-Girl one-off tryout, veteran scribe Otto Binder teamed with regular Superman artist Al Plastino to solidify the Man of Steel's family tree with a teenaged girl from Krypton. The results were an immediate smash, with overwhelmingly positive reader response, a massive increase in sales, and a whole new set of themes and stories for the creative staff to work with thanks to the perky, smiling blonde new arrival. Young girls especially were delighted to finally have a super-powered counterpart to Kal-El, and the character of Kara implanted herself so completely into the Superman mythos that it's amazing to think she wasn't introduced until twenty years into the character's run. The rabid response to this issue led to copies being passed along, borrowed, and read heavily, resulting in a startlingly low number of surviving copies, even by the scarcity standards of tough-to-find 1950s DCs. Coupled with the heavy demand for this historic key and the still-feverish fan base for the Girl of Steel, this is among the top-three toughest DC Silver Age keys to track down. With a television series accelerating its exposure, copies are snapped up almost the minute they hit the market, making this a no-brainer investment key, and a must-have for serious DC collectors.