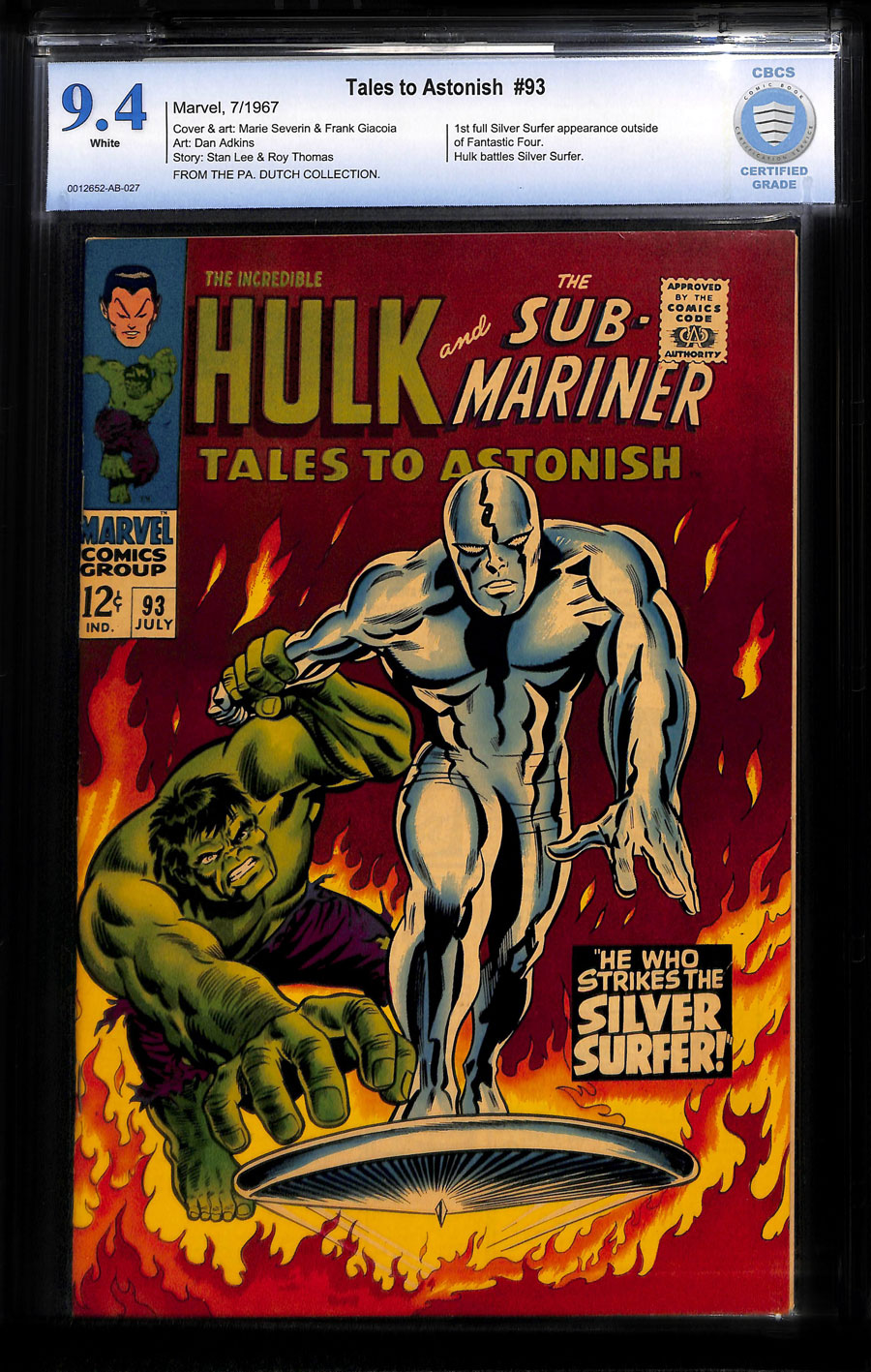 --
Accepting Offers
--
Offers
FYI there's no need to include decimal points(.).
Offer Confirmation
You are about to submit an offer of . If accepted, you are legally obligated to purchase the book. Are you sure you want to continue?
FYI there's no need to include decimal points(.).
Buy Confirmation
You are about to buy this item for , and will be legally obligated under the terms of our User Agreement to pay for it in a timely fashion. Continue?
PUBLISHER: Marvel
COMMENTS: white pgs
classic Hulk vs. Surfer; 1st full app. outside of Fantastic Four
Pennsylvania Dutch Copy
Read Description ▼
Sell One Of These Inquire About This

Watch
white pgs
classic Hulk vs. Surfer; 1st full app. outside of Fantastic Four
Pennsylvania Dutch CopyRepresenting the first time The Silver Surfer appears outside the pages of a Fantastic Four comic, Tales to Astonish #93 pairs the galactic herald up with the big and brutal Hulk for an adventure filled with pathos and bruising combat. The Hulk seeks out the Surfer in hopes of being ferried away to an existence without humans, unfortunately, his potential savior is also bound to the earthly plane, and cannot help the Emerald Enigma. The Hulk, not being known for his patience, decides to smash stuff, and steal the iconic surfboard to enact his escape, only to be thwarted at every turn and skulk off into the next issue of TTA. The appearance of two of Marvel’s Silver Age stars is worth the price of admission alone, but the inclusion of the Hulk in the MCU and the obvious future plans to bring the Silver Surfer into the mix gives this book an extra heaping helping of fun; and don’t sleep on the awesome Sub-Mariner tale within these action-packed pages.

Marie Severin was an American comics artist and colorist best known for her work for Marvel Comics and the 1950s' EC Comics. She is an inductee of the Will Eisner Comics Hall of Fame and the Harvey Awards Hall of Fame. Frank Jacobs, in his 1972 biography of EC publisher William M. Gaines, wrote, "There was Marie Severin, Gaines's colorist, and a very moral Catholic, who made her feelings known by coloring dark blue any panel she thought was in bad taste. [EC editor Al] Feldstein called her 'the conscience of EC."'