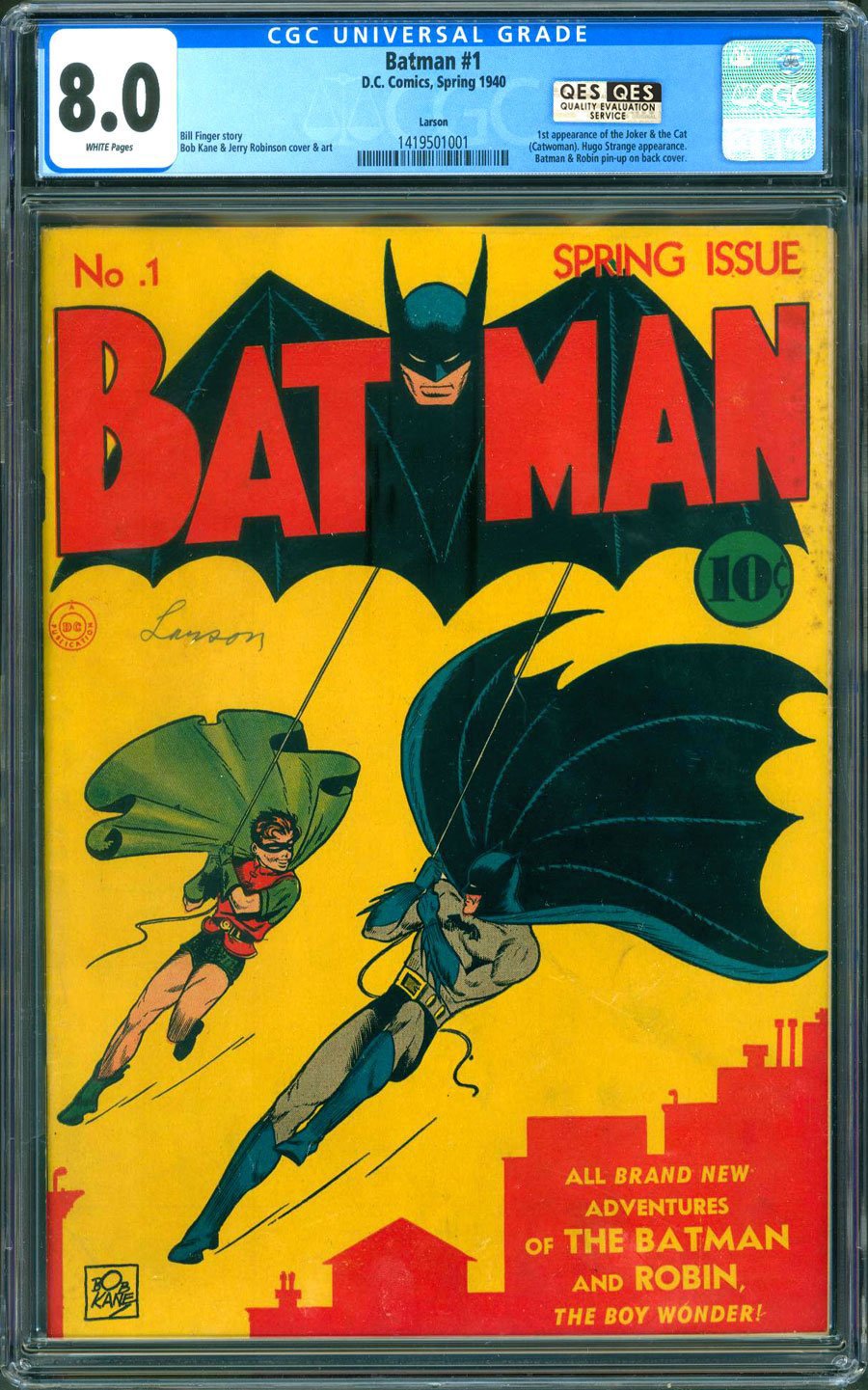 --
Accepting Offers
--
Offers
Offer Confirmation
You are about to submit an offer of . If accepted, you are legally obligated to purchase the book. Are you sure you want to continue?
Buy Confirmation
You are about to buy this item for , and will be legally obligated under the terms of our User Agreement to pay for it in a timely fashion. Continue?
PUBLISHER: DC
COMMENTS: white pgs; QES Certified: Criteria met: Preferred staple placement + bone-white pages + structural integrity + deep color strike (red, black & yellow)
one of the most iconic covers of the Golden Age! 1st app. Joker; 1st app. Catwoman (Spring 1940)
Larson Copy
Read Description ▼
Sell One Of These Inquire About This

Watch
white pgs; QES Certified: Criteria met: Preferred staple placement + bone-white pages + structural integrity + deep color strike (red, black & yellow)
one of the most iconic covers of the Golden Age! 1st app. Joker; 1st app. Catwoman (Spring 1940)
Larson CopyOne of the most famous comics of the Golden Age, featuring one of the most iconic covers, Batman #1 is the perfect cornerstone for any new GA collector; an accessible comic that only increases in value and popularity year after year featuring the debut of fan favorites the Joker and the Cat, later dubbed Catwoman.


There's easily been over a hundred titles devoted to the Caped Crusader, more than Superman and Spider-Man combined. Starring in several serials, animated series, TV shows, movies, video games, novelizations, record albums, soundtracks, Batman is everywhere! Along with the Boy Wonder, the Dynamic Duo is universally recognized in the shared global human consciousness and this issue, Batman #1, is a milestone key as it serves to announce that Batman and Robin are here and they're here to stay.

Structurally, this stunning example, is almost flawless with the look of a 9.0-9.2 copy. The Lamont Larson copy is one of the top Pedigrees ever discovered. With white pages to boot! Wow!

Sherrill David Robinson known as Jerry Robinson, was an American comic book artist known for his work on DC Comics' Batman line of comics during the 1940s. He is best known as the co-creator of Robin and the Joker and for his work on behalf of creators' rights. He was inducted into the Comic Book Hall of Fame in 2004.