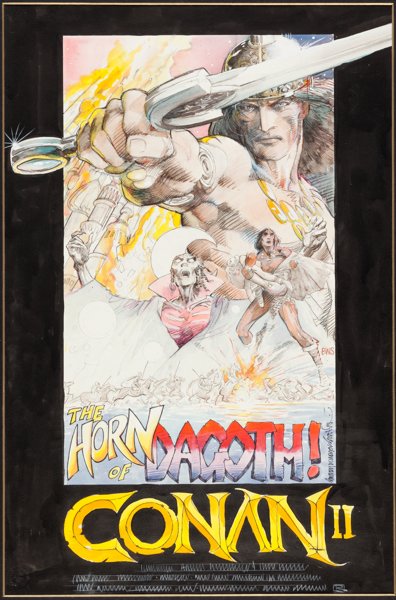 --
Accepting Offers
--
Offers
Offer Confirmation
You are about to submit an offer of . If accepted, you are legally obligated to purchase the book. Are you sure you want to continue?
Buy Confirmation
You are about to buy this item for , and will be legally obligated under the terms of our User Agreement to pay for it in a timely fashion. Continue?
PUBLISHER: Marvel
COMMENTS: Painter Barry Windsor-Smith; Image area 10.5" x 17.5", full 17" x 23" w/movie poster dressing on it.
Read Description ▼
Sell One Of These Inquire About This

Watch
Painter Barry Windsor-Smith; Image area 10.5" x 17.5", full 17" x 23" w/movie poster dressing on it.Conan was first drawn in comics by none other than the supremely talented Barry Windsor- Smith. This piece was painted in watercolor and ink over graphite for the 2nd Conan Movie, Conan the Destroyer in 1984. The unpublished piece was so influential that it guided Roy Thomas and Gerry Conway while they wrote the script to the movie.

The piece is in excellent condition and comes framed and matted.
Artist Information

Smith rose to prominence thanks to his incredibly detailed and beautiful work on Marvels' Conan the Barbarian, which employed an approach that had never been seen in comics before. The artist worked on several titles at Marvel in the Silver Age before launching his own pin-up publishing house Gorblimey Press, which he used to release impressive lithos to his fan base. Working through the decades, Smith became more and more disillusioned about the comic industry and its unfair treatment of artists, so he slowly started to withdraw from the business. Occasionally popping up with the odd series of graphic novel. Smith is commonly recognized as one of the great artists in the history of comics. He once created a fictional comic book for Oliver Stone's movie "The Hand" which was based on Conan, and Michael Caine played the lead, a character that was a comic book artist that bore a striking resemblance to Smith.