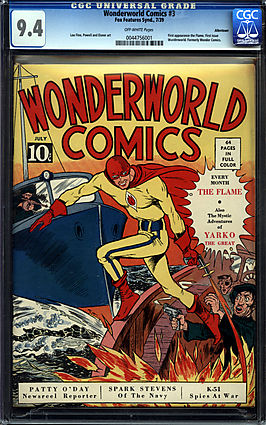 --
Accepting Offers
--
Offers
OFFER:
Offer Confirmation
You are about to submit an offer of . If accepted, you are legally obligated to purchase the book. Are you sure you want to continue?
BUY:
Buy Confirmation
You are about to buy this item for , and will be legally obligated under the terms of our User Agreement to pay for it in a timely fashion. Continue?
PUBLISHER: Fox
COMMENTS: ow/white pgs
Lou Fine/Will Eisner cvr/art; 1st issue (was Wonder Comics); 1st app. of the Flame
Allentown Copy
Highest Graded
Read Description ▼
Sell One Of These Inquire About This

DESCRIPTION
Share This:
ow/white pgs
Lou Fine/Will Eisner cvr/art; 1st issue (was Wonder Comics); 1st app. of the Flame
Allentown Copy
Highest GradedNational sued Fox because of Wonder Man's similarities to Superman, as well as story and illustration elements that referenced previous Superman adventures. The case was brought to court in Detective Comics, Inc. v. Bruns Publications, Inc., 111 F.2d 432 (2d Cir. 1940), in which Eisner refused to perjure himself about the derivative nature of the Wonder Man, and the subsequent decision forced Fox to drop the character after just one issue. This was the first copyright lawsuit in comicbook history and set a precedent for DC Comics' vigorous protection of its properties.

The demise of Wonder Comics and the Wonder Man character gave birth to Wonderworld Comics and Lou Fine's creation, The Flame. The Flame's secret identity is that of Gary Preston whose father drowned in a flood, but managed to save baby Gary by placing him in a basket, which was washed downstream to Tibet, where he was rescued by a group of lamas. The numinous nannies nurtured Gary and taught him their mystical secrets. Through his training, he gained the ability to control fire and temperature, the power to travel from place to place by materializing inside of a flame (even a match flame), and he could even raise his own body temperature to the point where he would burst into flames. There is little doubt that The Flame's introduction in July 1939 led to the creation of the Human Torch in October 1939.